This page explains a network setup using a HELIOS server for file server, and a separate LDAP server for authentication. It also describes the required steps to get a network based home directory for LDAP based users after logging on to a Mac client.

As a first step, remove the HELIOS home directory entry (“~”) from the volume definition in HELIOS Admin. Then create a new volume “Users” at path “/Users”, with the option Guest Access enabled. In addition, set the AFP server preference enableguest via the command:

For existing users, copy the old home directory with “dt” to the “/Users” directory and preserve the ownership and permissions by using the -p option.

For new users, create a home directory for each user and make sure that the permissions are set properly, e.g.

These permissions make sure that only the user has access to their home directory.

This example setup was performed on a freshly installed Mac OS X 10.7.2 Server. 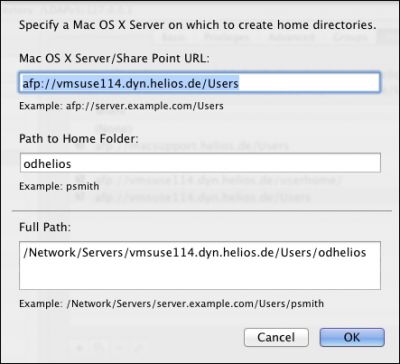 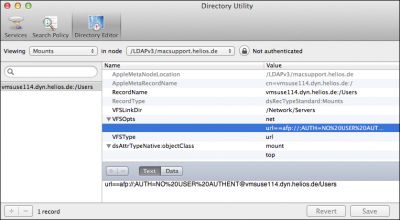 To authenticate a Mac client against the LDAP server authenticate as admin user in “System Preferences > Users & Groups > Login Options” and click the Network Account Server button. Add the server macsupport.helios.de to enable the LDAP based authentication.

(In this example the client "iMac" is used.)

Note: Do not use fast user switching on the Mac client for this test unless Mac OS X 10.7.2 is installed. Older versions may be buggy so that this won't work properly for an OD user in case a local user is also logged-in.